Luz e Som was in charge of the AC functionalities in this building, having followed the development of this project for two years until the final installation in 2011. 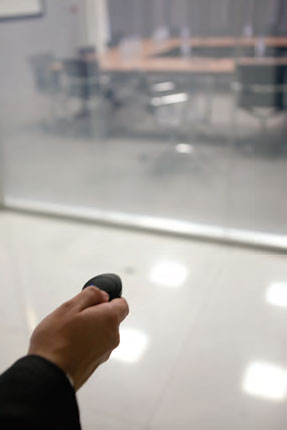 For longer meetings, the building has 40 meeting rooms and a conference center on the ground floor. This meetings or training center includes two rooms enveloped by Divilux glass partitions, with an obscuring functionality. With one click on a command, the "glass wall" gains enough opacity to offer privacy to the rooms.

These spaces were prepared so that they could receive any type of meeting and designed for intense use by a large number of people, so all the equipment, and the controls in particular, would have to be simple, intuitive and robust.

Each room has a Sanyo WM 5500L video projector suspended from the ceiling. In one room it is projected in a fixed screen with high contrast frame in black velvet while in the other it projects directly on the white wall (the high luminosity of the projector allows an image quality).

The PC signals are sent into the plugs embedded in the floor panels and managed by the Extron MLS 304SA multifunction controller, which also serves as the preamplifier for the Sonance CR 101 active speakers built into the ceiling. The entire system is controlled only by an Extron MLC 226 IP panel, fixed to the wall, which also controls the opening and closing of the room curtains. Additionally, it controls the associated equipment by RS323, IR or “dry contacts”. 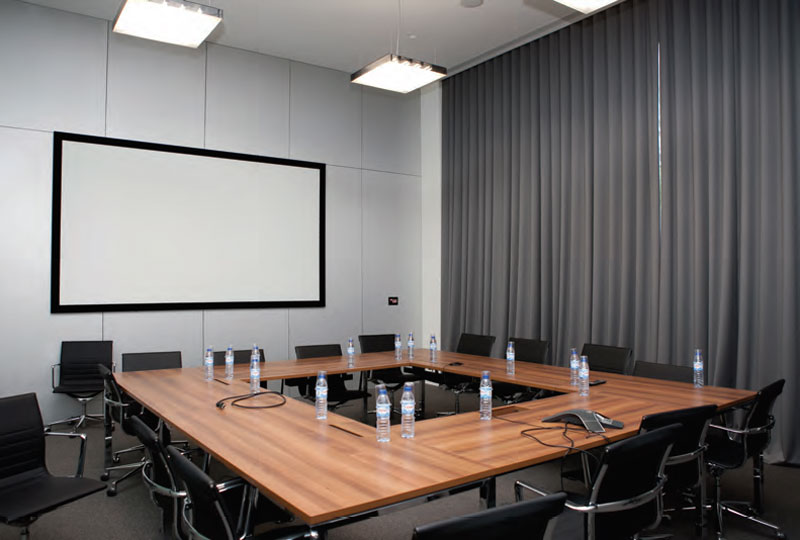 The administration room integrates an AV system that, although complex, is managed in an easy and elegant way by a Creston processor that allows controlling all the functions of the system as well as lighting and curtains. The control is done with software Crestron software - this allows to customise the entire interface to the users' needs – on a tablet. Two multifunctional wall-mounted panels are also available.

This room has two Oray projection screens embedded in the ceiling on opposite sides. To the center comes an elevator with two high-resolution Sanyo ZM 5000L video projectors. PC signals originate from six built-in sockets on the desk and sound managed by an Extron matrix that also receives RGB signals from the Tandberg videoconferencing console. The sound system is composed of four Sonance speakers built into the ceiling and two subwoofers, also on the ceiling, with a dedicated amplifier.